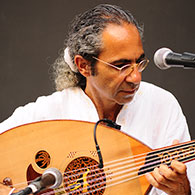 is a prolific ethnic musician who plays an important role in shaping the global world music scene. Over the last decade he has released 14 albums, covering a wide and varied cultural territory, and authentically representing Israeli, Jewish and Middle Eastern cultures and fusing them through music as a whole.

Much of Dalal’s work reflects his extensive musical skills in both classical-European, Jazz and Arabic music, and also reflects a strong affinity he has for the desert and its inhabitants. Dalal’s family came to Israel from Baghdad and his Iraqi roots are embedded in his musical work. Whether working on his own or with his Alol ensemble, Dalal creates new Middle Eastern music by interweaving the traditions of Iraqi and Jewish Arabic music with a range of influences originating from such diverse cultural milieus as the Balkans to India. His evocative compositions comprise a unique and colorful sound.

Apart from creating music, Dalal devotes his time to preserving musical heritages and preventing from becoming extinct, especially the Babylonian Jewish Iraqi musical heritage and the music of the Bedouins (the Sinai desert nomads).

Dalal has performed in concerts and festivals worldwide, including major venues such as New York Carnegie Hall and Lincoln Center, WOMAD festivals from England to Australia and New Zealand, as well as in a humble nomad’s desert tent.

Dalal participates and lectures in various music educational institute and universities in Israel and worldwide both regularly and as an artist-in -residence.

Besides his musical endeavors, Dalal is a peace activist, devoting much of his time and energy to build a bridge of understanding and creativity between different cultures, in particular between Jews and Arabs. Dalal performed at the Nobel Peace Prize gala concert in 1994 honoring the Israeli Prime Minister Yitzhak Rabin, Foreign Minister Shimon Peres and Palestinian Chairman Yasser Arafat.

Dalal has won several Israeli awards acknowledging his music and his contribution to Israeli music and was also nominated in 2000 for a Grammy as part of Jordi Savall’s ensemble and by the BBC world music rewards 2003 for his musical achievements as Best Musician from the Middle East.
In November 2015, Dalal received the Slotnik Confederation House Award for world music in Jerusalem.
Yair Dalal continues his musical work with new performance and composition projects.