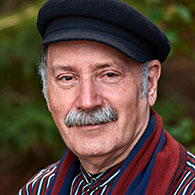 Walter Zev Feldman is a leading researcher in both Ottoman Turkish and Jewish music. He performs on the klezmer dulcimer (tsimbl), the Ottoman lute tanbur, and Ottoman percussion.

His book Music of the Ottoman Court: Makam, Composition and the Early Ottoman Instrumental Repertoire (Berlin, 1996) is taught as a basic text worldwide, and is set to be reissued in a revised version by Brill Press.

In 2004 he co-directed the successful application of the Mevlevi Dervishes of Turkey for inclusion in UNESCO’s list of Masterpieces of the Oral and Intangible Heritage of Humanity. He is currently preparing the monograph From Rumi to the Whirling Dervishes: Music, Poetry and Mysticism in the Ottoman Empire, sponsored by the Agha Khan University.

His book Klezmer: Music, History and Memory was published by Oxford University Press in 2016. Between 2011 and 2015 he researched the Jewish, Gypsy and Greek musical traditions of Ottoman and post-Ottoman Moldova, sponsored by NYU Abu Dhabi. Feldman is also an authority on Ashkenazic dance, forming part of his current research on the role of gesture in the performing arts, which he taught as part of the NYU Abu Dhabi core course “Gesture” (2013-15) and at the NYU event Weekend on the Square (2018). In 2017 he gave a series of workshops on this topic in Tokyo and Moscow.