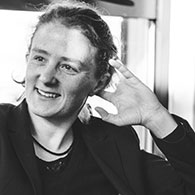 Susi “has a deep knowledge of the klezmer idiom” (Evening Standard), and her performances have inspired press reviews remarking on her “nimble solo features and excellent tone control” (The Scottish Herald).  Susi is a founder member of She’Koyokh, the London-based klezmer & Balkan group who were winners of the 2008 International Jewish Music Festival prize (Holland) and shortlisted for Best Group in the Songlines World Music Awards 2012.  Susi also co-founded the London Klezmer Quartet who have toured in Europe, Australia, New Zealand and Brazil and released four studio albums. She appeared regularly on the West End stage in the National Theatre’s smash-hit production of War Horse and has collaborated with the Aurora Orchestra, composer Jocelyn Pook, the Mahogany Opera Group and Limbik Theatre.

Susi graduated from the Royal Academy of Music in 2004 and continued her studies in Istanbul with Selim Sesler, with Nikola Iliev at the Plovdiv Academy of Music and with leaders of the klezmer revival.  She is now in demand as a teacher herself and has been on the faculty for KlezNorth, Klezfest London and Yiddish Summer Weimar.  In 2017 Susi received an ARAM (Associate of the Royal Academy of Music), awarded to former students who have made a significant contribution to the music profession.