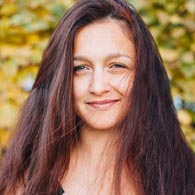 Sasha Lurje was born in Riga, Latvia, and has been singing since she was three years old. She has gained experience with many groups and in various styles including classical and folk singing, jazz, rock, and pop. Parallel to her singing career she has also been involved in several theater groups where she focused on musical and improvised theater.

Since 2003 she has been researching traditional Yiddish singing style and repertoire, investigating secular and religious vocal materials. With her band Forshpil, she is developing a new style of Yiddish music by integrating the traditional sound into modern context.

Sasha is involved in a number of international projects varying in repertoire and styles. She has collaborated with Daniel Kahn to develop an “interlingual” love song duo program STRANGELOVESONGS. She is also a member of an all-star band Semer Ensemble led by Alan Bern. The group reinterprets Jewish music recorded in Berlin in the 30s and is esteemed for the variety of styles and genres tied together in an artistic and musical way. Sasha also performs and leads Yiddish dance with the Berlin klezmer band You Shouldn’t Know From It. One of her most recent projects is Goyfriend: a collaboration with Brooklyn-based Band Litvakus discovering the musical interactions between Jews and their non-Jewish neighbors.

Sasha conducts her research in traditional voice techniques and voice production. And has presented her work at various conferences.

Sasha has performed and taught Yiddish singing in Russia, Europe and North and South America and has been a longstanding artist and faculty member at Yiddish Summer Weimar, where she coordinates the Song workshop.