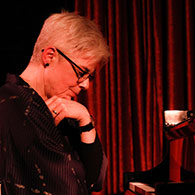 Exhilarating jazz pianist and improviser Marilyn Lerner performs to acclaim internationally, from her native Montreal to Havana, from Jerusalem to Amsterdam and Ukraine. A prolific artist, Lerner’s work spans the worlds of jazz, creative improvisation and klezmer.

In addition to her innovative solo piano work, Lerner has toured with the Queen Mab Trio (with Lori Freedman and Ig Henneman) and the Ig Henneman Sextet across Canada, the U.S. and Europe. Lerner has performed with Tito Puente, Gerry Hemingway and Steve Lacy. In the jazz world, she currently performs with her two trios, the Ugly Beauties (with cellist Matt Brubeck and drummer Nick Fraser) and in a New York based ensemble with drummer Lou Grassi and bassist Ken Filiano.

Lerner accompanies silent film for the Silent Revue series at the Revue Theatre in Toronto as well as at the Toronto International Film Festival. For over four years she has been touring Canada, the US and Europe, performing music for the 1918 silent film The Yellow Ticket by violinist-composer Alicia Svigals.

She is active in Jewish music scene and has taught and led master classes at KlezKanada and Yiddish New York. She composes, arranges and directs music for the annual Dreaming in Yiddish concert in memory of the great Yiddish singer Adrienne Cooper. She also performs with Frank London, Alicia Svigals, Susan Watts and other luminaries of the klezmer revival scene.