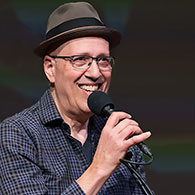 Josh Waletzky has sung, taught and composed Yiddish music all his life. He co-produced the Grammy-nominated film Partisans of Vilna (1989), and his groundbreaking CD of original Yiddish songs, Crossing the Shadows (2001), was greeted as “a classic of the American-Jewish folk revival.” Upon the release of his newest album of original Yiddish songs, PASAZHIRN/Passengers (2017), Waletzky was hailed as “the poet-laureate of new Yiddish songwriting.” Waletzky has taught Yiddish song internationally, including at Yiddish Summer Weimar and Yiddish New York.

He is also an award-winning documentary filmmaker. He sound-edited the Academy Award-winning film Harlan County, USA (1976); directed the films Image Before My Eyes (1981) and Partisans of Vilna (1986); composed Academy Award-nominated music for the film Bernard Herrmann (1992) and edited the Emmy Award-winning Itzhak Perlman: In the Fiddler’s House (1995). Since 2005, he has directed and written the music for four documentaries on Yiddish writers, most recently With Pen and Paintbrush: Yonia Fain (2018).