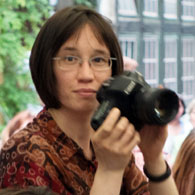 was quickly captivated by the richness of Yiddish culture, which she encountered as a student of Jewish Studies, Religious Studies and History. To this day, Yiddish culture has kept its hold on her and continues to offer surprises. For over a decade, Janina has dedicated herself to exploring the many, very different worlds of Yiddish, ranging from a one-and-a-half year stay with the poet Beyle Schaechter-Gottesman (who was also the subject of her Master's thesis), to internships in the sound archive of the YIVO Institute, to forays in the ultra-orthodox neighborhood of Borough Park in Brooklyn, New York.

She studied Yiddish from Cornelia Martyn (Potsdam University), Miriam Hoffman (Columbia University, New York) und Professor Dovid Roskies (Jewish Theological Seminary, New York) as well as through constant exchanges with Yiddish experts throughout the world, including the recently deceased Yiddish Summer teacher Dorothea Greve. Outside of the university setting, she learned many different Yiddish dialects through conversations with native speakers in New York, Israel and Czernowitz, among others.

Janina taught Yiddish in Birobidzhan, in the Jewish Community of St. Petersburg and at Potsdam University, where she also tutored subjects such as TaNaKh (the Hebrew Bible) and Jewish philosophy.

Janina has been part of the Yiddish Summer community since 2003, first as a student, later as program assistant in 2011 and 2012, as well as teacher and photographer.

Presently she is a researcher and PhD candidate.