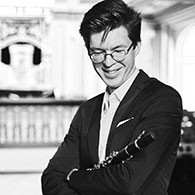 St. Petersburg-born klezmer clarinetist Ilya Gindin has been playing Jewish music for almost 20 years and is one the most prominent and original performers on the Russian and international Klezmer scene. Drawing on his strong academic background, Ilya gracefully combines centuries-old folk music traditions with the subtlety and severity of modern performing art, bringing Jewish wedding music to a high artistic level and making it accessible to a wide audience.

Ilya has performed in over 20 countries from China to Canada, both as a member of the St. Petersburg group Dobranotch and as a soloist, and has a long list of CDs to his credit.