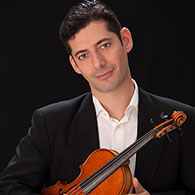 Igor Mishurisman began studying violin at age six in his hometown of Odessa, where he attended the Stolyarsky Music School for gifted children and the National A. V. Nezhdanova Academy of Music, which he finished with honors. He was a laureate of the International Prokofiev Competition and received a scholarship from the city of Odessa. Further studies took him to Karlsruhe and Mannheim, where he completed his training with Nachum Erlich and Dora Bratchkova. Igor has attended masterclasses with Wolfgang Marschner, Ivry Gitlis, Bruno Canino and Robert Canetti. Before assuming his current position at the Hessian State Theater in Wiesbaden, he was engaged as first deputy concertmaster at the Saarland State Theater in Saarbrücken. Igor has performed as a soloist with various orchestras and performs regularly in Germany and abroad as first violinist of the Rheingau String Quartet and as a member of Duo Stoljarski. He also has extensive experience as a music educator, having taught at the Hessian State Youth Orchestra and the Hessian State Music Academy in Schlitz, among other places.