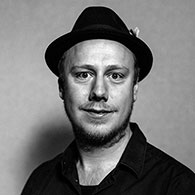 Emil is a clarinetist, composer and band leader. Born in 1983, he started playing drums at age eight, but soon fell in love with woodwind instruments. At nine he was admitted as a clarinetist to the Tivoli Youth Guard, where he took his first steps as a professional musician. While trained in both classical music and jazz/pop, it was the old recordings of the Jewish masters David Tarras, Shloimke Beckerman and Naftule Brandwein that showed Emil his musical path. He quickly discovered his own voice in Jewish music and established Mames Babegenush, a band with roots in East European Jewish dance music that has dazzled audiences and critics around the world. He is also a co-founder of Shtetl Neukölln – Yiddish Culture Festival Berlin and the Neukölln Klezmer Sessions.