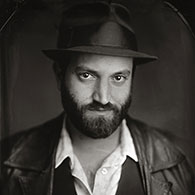 Daniel Kahn, born in Detroit, studied theater and poetry at the University of Michigan. After living as a songwriter in New Orleans and New York, he moved to Berlin in 2005 and founded his band The Painted Bird, which went on to tour the world and produce five award-winning albums. He is a founding member of The Brothers Nazaroff, Semer Ensemble, The Unternationale and The Disorientalists. He works as a director, actor, composer, playwright and music curator at the Maxim Gorki Theater in Berlin.

He played the role of Pertshik in the hit Yiddish-language production of Fiddler on the Roof at the National Yiddish Theatre Folksbiene in New York and Biff in the critically-acclaimed Yiddish production of Death of a Salesman at New York's Castillo Theater. This spring, he will be part of the all-star program “From the Shtetl to the Stage” at Carnegie Hall. In 2016, the Ashkenaz Foundation named him the inaugural Theo Bikel Artist-in-Residence (Bikel once said he felt that Daniel was carrying on his work). In 2018, he received the Chane and Joseph Mlotek Award for Yiddish Continuity. He has taught and performed in every corner of the Yiddish world, from California to Moscow, and has attended Yiddish Summer Weimar since 2005, both as a participant and as an instructor.