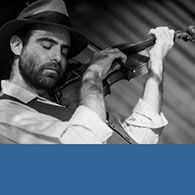 Craig Judelman grew up in Seattle where he began studying classical violin at a young age soon branching out to Jazz and then klezmer and various folk music by age 12. His klezmer teachers included the early Klezmer revival fiddler Wendy Marcus and later David Krakauer. He went on to study composition with Joan Tower, as well as classical and jazz violin at Bard College in New York.

Craig first made a name for himself in New York as an American folk musician, where he was a founding member of The Dust Busters, who released an album with their mentor John Cohen on the prestigious Smithsonian Folkways Label. He later joined the band Litvakus, one of the only contemporary bands devoted to the regional style of the Northern European, or Litvish Jews. In recent years he has devoted himself to intensive study of the few old Jewish fiddlers in the early part of the 20th century, as well as deepening his understanding of the Litvish style. He has learned on the bandstand from some of the best contemporary Klezmer string players, including Michael Alpert, Mark Rubin, Pete Rushefsky, Bob Cohen and Jake Schulman-Ment.

Craig is a founder, arranger and fiddler in Goyfriend, a new collaboration between members of Litvakus and Sasha Lurje that explores the relationship between the Jews and their Baltic and Slavic neighbors. Together with Ms. Lurje he also founded Lebedik, a band devoted to Yiddish song in its various forms. He performs with Daniel Kahn and the Painted Bird and a variety of European and American Swing and Old Time American folk music bands.

Craig has been a music educator for over a decade, including at various festivals and workshops, most recently at the Shtetl Neukölln festival in Berlin. He has performed there and at other Yiddish music festivals, including Lviv Klezfest, Singer Festival in Warsaw, Yiddish New York and Klezmore.