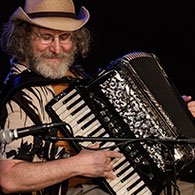 Recipient of the prestigious Weimar Prize in 2016, Dr. Alan Bern is the founding artistic director of Yiddish Summer Weimar and the OMA Improvisation Project (formerly Winter Edition), founding director of the Other Music Academy (OMA), and co-founder and chair of other music e.V.
In 2017, Bern was honored with the Thuringia Order of Merit.

His education included classical piano with Paul Badura-Skoda and Leonard Shure, jazz with Karl Berger, the Art Ensemble of Chicago, Anthony Braxton and others, contemporary music with John Cage, Frederic Rzewski, Joel Hoffman and others, and philosophy and cognitive science with Dan Dennett. He received his master's degree in Philosophy and his doctorate degree in music composition. He has composed and directed music for theater and dance in New York, Montreal, Berlin, Lucerne, Essen and Bremen, among others. He is the creator of Present-Time Composition©, an innovative approach to music improvisation informed by insights from cognitive science. In 2009, he was given the Ruth Lifetime Achievement Award for his work as a musician and educator.