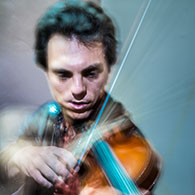 New York-born violinist Jake Shulman-Ment is at the helm of a new generation of klezmer and Yiddish music performers. He has recorded and toured internationally with Daniel Kahn and the Painted Bird, Frank London, Di Naye Kapelye, The Brothers Nazaroff, The Other Europeans, Michael Alpert, Joey Weisenberg, Duncan Sheik and many others. A widely sought-after teacher of the klezmer fiddle tradition, Jake has been a faculty member of KlezKamp, KlezKanada, Klezmer Paris, the Krakow Jewish Culture Festival, Yiddish Summer Weimar, Fiddle Tunes, Yiddish New York and other festivals around the globe. As a Fulbright scholar he collected, studied, performed and documented traditional music in Romania and has lived and traveled in Hungary and Greece, learning traditional violin styles. In 2018 he received the prestigious NYSCA/NYFA Fellowship in Folk/Traditional Arts. Jake's debut solo album A Redele (A Wheel, 2012) was nominated for the German Record Critics' Award. His new group, Midwood, released its debut album Out of the Narrows (Chant Records) in May 2018.