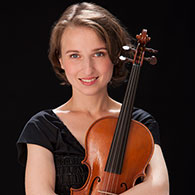 Anastasiya Mishurisman is a violinist and violist with a natural charm and a refined sense of style.

After attending the Stolyarsky Music School for gifted children and the National A. V. Nezhdanova Academy of Music in Odessa, she continued her studies at the University of Music Karlsruhe with Nachum Erlich and obtained her master class diploma under Valery Rubin at the Nuremberg University of Music, graduating with honors.

Already as a student, she performed with prominent orchestras in her hometown, including the Odessa Philharmonic; she also spent several semesters studying conducting and music history.

Anastasiya is a sought-after chamber musician; her concert career has taken her to Germany, Ukraine, Poland, France and Switzerland.